I needed a Mexican food fix and, while Lone Pine has such, it is not highly recommended. I was also in the mood for a road trip so Bob, who is way too quick to indulge me, took me to Bishop (about 60 miles north) which had three Mexican restaurants with good reviews (no, we didn’t try to eat in all 3!). Returning we could see in the distance that it had become quite hazy. Along the highways up here you see signs warning of dust storms. We have been told that they are now trying to keep some water in the Owens Lake as well as some gravel cover and vegetation to keep the “dust” down. Apparently, this dust is made up of salt, sand and a variety of minerals, some of which are quite toxic (cadmium, nickle and arsenic) and create breathing difficulties in some area residents .  Unlike most lakes in this area which have been dry for thousands of years, this lake had water in it (although it had been much reduced by farmers in the area) until 1913 when the water was redirected to the Los Angeles Aqueduct. As we returned the area was under a wind alert and we were seeing the effects. It’s not really easy to see in these pictures but the snow on the mountains was swirling and the valley was very hazy with some of what we from West Texas call dust devils. 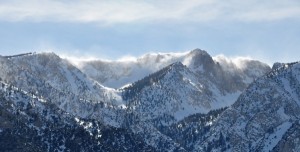 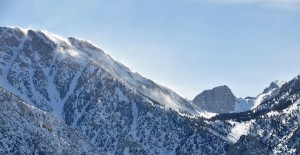