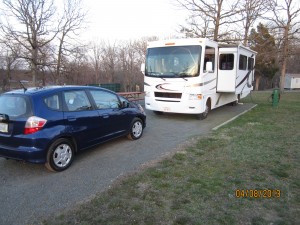 Well, we have finally done it!  Bob and I, after talking about it and dreaming it for 30 plus years, bought an RV and are going on the road.  It hasn’t been that simple, however.

So let me go back a little and give you all the painful details.  We took a trip beginning in August 2012 that was about four months long.  Several things happened that got us talking again about living in an RV.  We began to talk seriously when we did the math and thought our retirement would allow us the luxury.  We stopped in Chattanooga on the way back to Virginia at a large RV dealership.  The dream became more vivid.

By the time we were home in Virginia in early December we had decided to look seriously into the cost of an RV, insurance, etc. and begin to move toward selling our house so we could go on the road full-time.  We had discussed keeping the house as a rental but didn’t really want any hassles we could avoid.  Initially we talked about being on the road in a year.  However, I have never been known for my patience and, as we began to look at the process, it became clear that we did not want to try to sell furniture on Ebay or whatever and, that really, we did not want much that was in our house.  So, we decided to store what we wanted from the house, give the girls and any other family what they wanted and have an estate sale.  Of course, once we had the estate sale we had to be out of the house so we needed somewhere to live. That meant finding a motorhome ASAP.  Long story somewhat short, everything fell into place quite nicely and, by early March, 2013, we were out of the house and living in a 33 foot motorhome. AND we love it.

We took the granddaughters to Yorktown and Williamsburg and up the Delmarva Peninsula to Annapolis for their week of Spring Break. It was our first trip in the RV and we were not towing a car at that point so we had to move the RV daily to do the tourist thing but it went really well and the girls seemed to enjoy the experience.

We stayed in the Northern VA area (regional parks in Reston and Manassas) while we had work done on the house and bought a car we could tow four-on-the-ground (Honda Fit) and had it and the RV outfitted to tow.  There was a possibility that Jen and Jeff might want to buy the house but we had to wait until early June to see if that would work out.  It did not and we put the house on the market late that month.

One thought on “The Dream Begins”