We were told that if we saw cars lining the side of the road it would probably be a moose sighting and sure enough we were lucky enough to see a mama moose near the road. About 20 cars were stopped and 30-40 people were lining the roadside trying to get a look and take a photo.  At first we could not see the calf that was well hidden in the brush. The mama moved gradually closer to the road and the calf came out. We were really surprised that the mama never became alarmed by all the people so near her calf.  I kept expecting her to charge the crowd.  I read later that more people are injured by moose than by wolves and bear combined. That seemed amazing until I realized that none of us who were 20 feet from this moose would have gotten that near a wolf or a bear if we could avoid it. 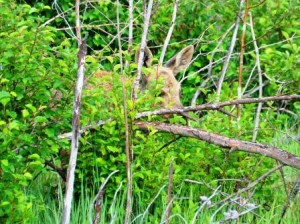 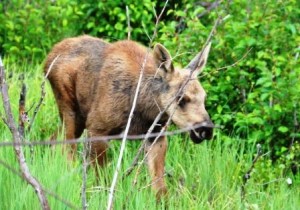