This is the longest floating bridge in the world (four of the five longest are in WA – one is in Guyana). It consists of 23 pontoons screwed into two continuous floating bodies connected by a pontoon for the shipping. Each float weighs about 5000 t. The floating parts are anchored with steel ropes to concrete blocks which each weigh about 500 t of concrete and connected on both sides with an 85-meter-long truss to the landside bridges.  The opening is used by the submarines of the Ohio class to reach the Naval Base at Kitsap (sometimes one can see a sub surface to pass under the bridge – we weren’t so lucky). The bridge is opened by raising the road sections adjacent to the pontoons and pulling the drawbridge underneath them. 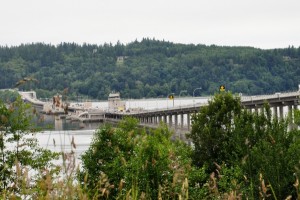 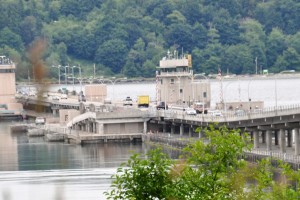