Our tour bus took us past the TD Garden (remember Boston Garden?) and the young man pointed out the statue of Bobby Orr.  Bob was sitting right behind the driver and says to him that Bobby Orr’s wife is on board his bus.  I spoke up to say I was married to Bobby Orr (which I am) but he didn’t buy it for long. He did seem to think it was cool that he had “Bobby Orr” on board and I suspect he will tell his friends that.  Anyway, this wonderful statue is out front of the Garden.  If you don’t recognize it or if you are not a hockey fan or if you are not of a certain age or if you are not married to Bobby Orr, here’s the scoop: the statue is copied from a famous (Sports Illustrated says it is the greatest sports photograph of all time) photo of Bobby Orr just after he scored the winning goal in the 1970 Stanley Cup playoffs.  It was the first time they had won in 29 years. The Bruins were playing the St. Louis Blues in the 4th game of the playoffs.  Bobby Orr (age 22) wearing #4, scored the 4th (and winning goal) 44 seconds into the 4th quarter (OT). As he scored he was tripped by an opponent wearing #4. Ain’t that fun!  Go here to see the famous photo. 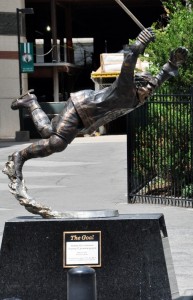