We met Bill and Isa for breakfast after a little bit of misdirection by Bob. Usually Bob knows exactly where everything is and how to get there. On this trip, however, he has not paid as much attention as usual (or is just getting old) so Marilyn has had to pick up the slack. Fortunately, we have one phone that works in Europe and were able to communicate with Bill until we could meet up.

After breakfast, Marilyn went back with Isa to the house while Bill and Bob did a quick visit to the interior of the main gate and four churches. A very small museum at the top of the main gate is a museum dedicated to pharmacies. More here.

The Cathedral of St. Mary of Burgos was started in 1221 and finished some two hundred years later. It’s almost as hard to get construction workers in Burgos as it is in New Mexico (little joke for Marilyn Elaine and Granny). More here.

The Iglesia de San Nicolás de Bari is situated next door to the cathedral. The altarpiece is one of the largest in Spain and is also the only one carved from limestone. It is also the church in which Bob’s brother, Bill, and sister-in-law, Isabel, were married in 1978. We were fortunate enough to be there for the wedding and the attending functions. If you’re up for some long, entertaining stories, ask Marilyn about the wedding dinner and/or Bob about the bar-hopping afterwards. More here.

The Iglesia de San Esteban was completed around 1400 near the outer walls of the city and is now a museum of altarpieces.

The Iglesia de San Gil was the last of the churches we visited. Seemed we went from most grand to smallest. All were beautiful in their own way.

After a short rest (much needed, Bob did not remember Burgos being so up and down!), we met Teté, Eugenio, and the Argentinian cousins(?) at a restaurant known for baby lamb (which was delicious). The restaurant is across the street from some of the administrative offices of the University of Burgos. The buildings were once part of an army facility. 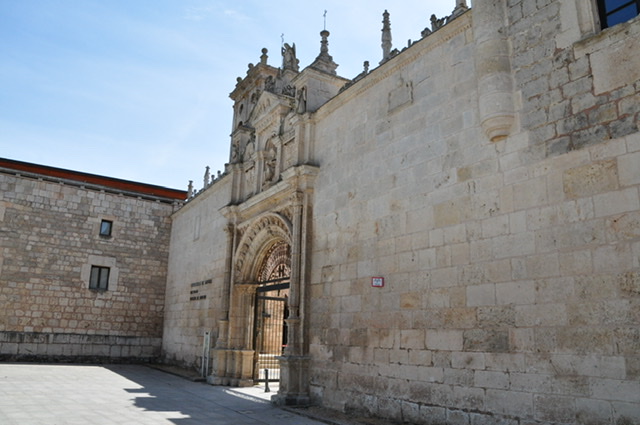 After a good nights sleep, we got up and went back to Ibanez (best churros in Burgos!) for breakfast and people watching. It is in such a beautiful setting.

Then we went to Bill and Isa’s for more visiting. Along the way we stopped at Tete’s pharmacy because we had never been there before. Pharmacies are heavily regulated by the Spanish government and cannot be located within 150 meters of another pharmacy. They are required to be open mornings and evenings and some weekend days.

After lunch at the same cafe where we had tapas a day or two earlier, we took a short nap and then went to Tete’s partner, Eugenio’s, bar for dinner with distance relatives from Argentina who were visiting. The specialities of his bar are Russian salad (like potato salad only better), Spanish omelette, and octopus. The bar is near the school of music and while we were eating, a full orchestra performed (we think in celebration of the opening of the new high-speed train to Madrid for which the King was visiting Burgos).

Harpists have the best job — somebody else moves the harp and they don’t have to play very much or very often.

Started the day with slightly inferior churros and chocolate just around the corner from the hotel. Then we visited the Museum of Human Evolution. This museum documents some of the most important human fossil finds in the world. They were discovered at Sierra de Atapuerca, about 16 km east of Burgos. Beautifully done and very informative. More here.

Had lunch at Mar del Norte, a local seafood restaurant with amazing appetizers and the best paella in Northern Spain. It was an almost typical Spanish meal, lots of food, wine, and laughter; but was atypical as it only lasted an hour and a half.

Bill and Bob explored a little of the Plaza Mayor and the old town before having dinner with Isabel’s sister, brother, sister-in-law, nephew and their visitor from North Carolina. The speciality of the house (Meson de Burgos) is potatas bravas — small chunks of potato in brava sauce (olive oil, paprika, stock, and a little flour).

Gate to the city, a close up of the gate, and the interior of the gate itself.

After dinner Bill, Isa, Tete, Marilyn, and Bob had ice cream (not sure where we found room). The cathedral was lit with multi-colored lights. None of our Spanish family had ever seen this phenomenon so we felt really lucky to be here at this time. They think because the day before marked 801 years since construction began.

Almost everything on Isabel’s list of must-dos involves eating. So, today we met Isabel’s sister, Tete (Teresa), for tapas at the courtyard across the street from the house. Not a huge variety, but everything was delicious.

Finished the day at Bill and Isa’s with cheese, crackers, hummus, and lots of catching up. Back to the hotel to try to catch up on our sleep.

The hotel Bill and Isa picked for us is beautiful. It was, at one time, a Jesuit school with high ceilings and a beautiful, very typical, school courtyard. We slept in, after the early flight yesterday, and Bill picked us up and took us for some of the best churros and chocolate we have ever had. The pedestrian avenue along the river at this point has been planted with banana trees creating a delightfully cool micro-climate.

We took advantage of the early coolness to take a short walk. We had only been in Burgos for three or four nights when Bill got married in 1978. Needless to say, we didn’t remember much beyond the 14th century cathedral and the smaller church where Bill and Isa were married. It is a city of about 200,000 people. It feels more like a small town because of all the pedestrian-friendly features in the central city where Bill and Isa live.

Waiting for Bill to take a walk.

Got back to Bergen early in the day and more or less collapsed in the hotel room. Got up at 3 AM to get a 4 AM cab to the airport (30 minutes or more) for a 6:30 AM flight to Amsterdam. Made the plane with no problems about 9:30 AM for an 11:30 flight. Amsterdam to Madrid plane was the least populated we have seen. In a 3 x 3 x 3 configuration, there were many 3’s with only one person and most with only two. Got to Barajas (Madrid) a little early and taxied for what seemed forever. Then waited 45 minutes or so to get our luggage — Bob’s backpack is too big to check.

Bob’s brother, Bill, met us at the airport and drove us the two hours to Burgos where he and his wife Isabel live in a new flat that they moved into during Covid. We are only the fourth family to be inside their beautiful new home!

The last day of our Norway tour started with a short ferry ride and involved an intermediate stop. On the way to the ferry Bob got a picture of a boat at a mooring ball. We had seen several over the last few days and were trying to figure out how one got to the boat. Turns out there are two lines (or a big loop) from the shore to the buoy (with the boat) and back to the shore. We think that one can just pull on one of the lines to pull it in and the other to move the boat out.

Aboard the ship, Bob just couldn’t figure out what the big boxes on the stern were for. A crew member informed him that we were on an electric ferry and the setup below involved wireless battery charging. What will they come up with next?

Stopped in Vik to see the Hove Church. It is the oldest stone building in the Sogn region. Beautiful inside and out. More here.

The trip back to Bergen again involved driving over a high mountain pass. This time was a little less traumatic for Bob because the valleys were filled with clouds. If one can’t see down, one is a lot less nervous. We sorta promised ”No more waterfalls”, but this one was just too beautiful not to include.

Today was more of a river and lake tour than the large bodies of water that we call fjords. It is unclear when one looks up the definition of a fjord whether it includes the lakes, rivers, etc. The scenery was spectacular, as usual, just different from the previous days.

Towns and villages pop up wherever there is land level enough to build on. Some of it is accessible only by water!

Went to some very high altitudes today so rivers rather than large open valleys. The up from the previous night did not seem nearly as steep as the ride down. Only a few pictures from the top because Bob just can’t seem to get close to the edge.

The undergrowth was very different at altitude. It seemed like fewer rocks and more moss and ferns. It was still beautiful.

It was a day of mostly waterfalls, including two of the most famous in Norway — Bridal Falls and the Seven Sisters.

Bob has decided that global warming is not the cause of rising sea levels — it has to be all the output of the waterfalls in Norway!

After breakfast, we decided to visit the chocolate factory. It is not a factory in which you can observe the process but the chocolate is made downstairs from the shop where it is sold.

We were a little disappointed that we were not going to see a fjord from the water. Our itinerary from the tour company took care of that by scheduling a 65-minute ferry ride through the Geirangerfjord from Geiranger to Hellesylt. It is arguably the most beautiful fjord in the world and a UNESCO World Heritage Site since 2005. More information here. It is considered both a ferry trip and a tour. The ferry was quite nice and had frequent announcements about what we were seeing.

You can see from the waterfall pictures that there is not anywhere to put a road. That was true through most of the fjord.

After a discussion about what constitutes a fjord with neither of us knowing a precise answer, we looked it up just to share with the whole world. Wikipedia says:

According to physical geography, a fjord or fiord is a long, narrow inlet with steep sides or cliffs, created by a glacier.

Day 2 of our trip took us from Sogndal to Lom to Geiranger (if we can figure out how to post a map we may add one to this blog — until then just use Google Maps). The drive started to the north following the famous (so say our tour guides) National Tourist Route ”Sognefjellsvegen”. This is the highest and most impressive mountain pass in Northern Europe.

After lunch in Lom, we continued to Geiranger. Highlights included the Blabreen glacier, a fjord with torquoise water, and more waterfalls than we cared to count. Because we love you all, we are including only those pictures that we don’t want to forget.