The young ranger at the Badwater Basin did a wonderful job explaining this.  She selected several children to help her (this is President’s Day and free in the park so there were quite a few families). The children were lined up to be the weather and the mountain ranges from the Pacific to Death Valley.  While the “weather” blew from the Pacific Ocean, the ranger used a wet sponge to demonstrate the clouds coming up against each mountain range, dropping it’s water (she didn’t actually get the kids wet) and moving on until, when she reached the final mountains, she ran out of water. So, poor Death Valley doesn’t get much of the moisture. We didn’t ask, but I am going to look up, why during the winter months the valley gets more rain (if you want to know you’ll just have to look it up, too – go Wikipedia).  In all, it only gets an average of less then 2 inches a year – some years none at all.  The two days of rain we experienced dropped about an inch on the basin. That is, obviously, not the whole story about water and Death Valley since there are desert valleys both east and west of Death Valley (those basins and ranges created as the mountains shift) but it was such a well executed and entertaining explanation.

To the west of the basin are the Panamint Mountains which you can see here with snow on them (the clouds almost make that impossible but there really is snow). 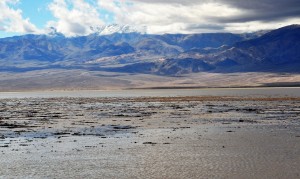 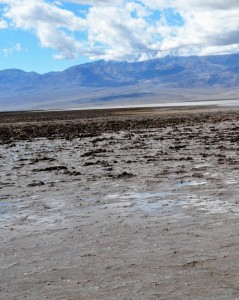