Today we left Creede to drive to Montrose, CO.  To get there we had to drive over two passes – one at almost 11,000 feet and one at more than 11,500 feet.  I have been rather anxious about this because, after the second pass, you have to come down more than 3,000 feet in a curvy ten mile span.  We had driven it in the car to visit Lake City (and see what the road was like) so there weren’t any surprises but still it is a little scary in a motor home.  I keep reminding myself that people do it every day but somehow that’s them, not us.  The mountains around here are so awesome and I know we have to use some of these passes if we want to visit much in CO so, onward and upward (ha, ha). Actually, Bob did a wonderful job and hardly scared me at all! It reminds me of a friend of ours who had a tremendous fear of heights.  He used to say that if it had been up to him western expansion would never have gotten past the Appalachian Mountains.  I am sure it would not have gotten past the Rockies if I had to cross in a covered wagon! Thankfully, we have arrived in a lovely little park in Montrose.  Nice shade trees (hotter here since we have come down 2,000 to 3,000 feet compared to Creede) and even a small mini-golf course (straight in front of our little blue Fit in the middle picture).  I’ll teach Bob how to play later. The park owner tells us the best Mexican food in town is across the street and half a block away. OK! 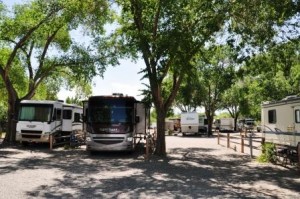 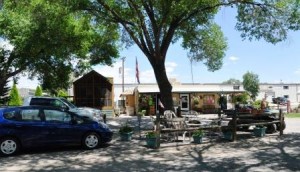