We were told when we were in Eagle Nest, NM that people had been evacuated from South Fork, CO last year due to a fire. We have learned since being here that the fire was very large and we saw evidence of it on our trip to the Rio Grande headwaters.  Apparently they evacuated South Fork because, even though the fire ranged all across the mountains near here, it came closest to a populated area in South Fork. You will see in one of the pictures an interesting, almost geometrical fall of aspen trees.  We attempted to drive to the campground near the bridge shown in one picture but, due to the fire damage, the area was closed. Of course, these pictures show only a small area of the thousands of acres destroyed. 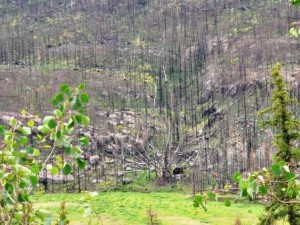