Our friend Lee is INTO astronomy.  He recently went to to the hometown of Clyde Tombaugh who discovered Pluto in February, 1930. The town was celebrating NASA’s New Horizons spacecraft nearing Pluto (humanity’s first journey to Pluto) and carrying some of Tombaugh’s ashes .  Lee gave a presentation on this flight and about Pluto (which was the ninth planet until it was demoted to a “dwarf planet” after the New Horizons spacecraft was launched). Here is Lee with his T-shirt commemorating Pluto. 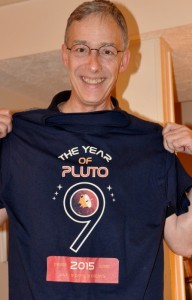